Uncovering the Secrets of the Ancient Lost City of Petra 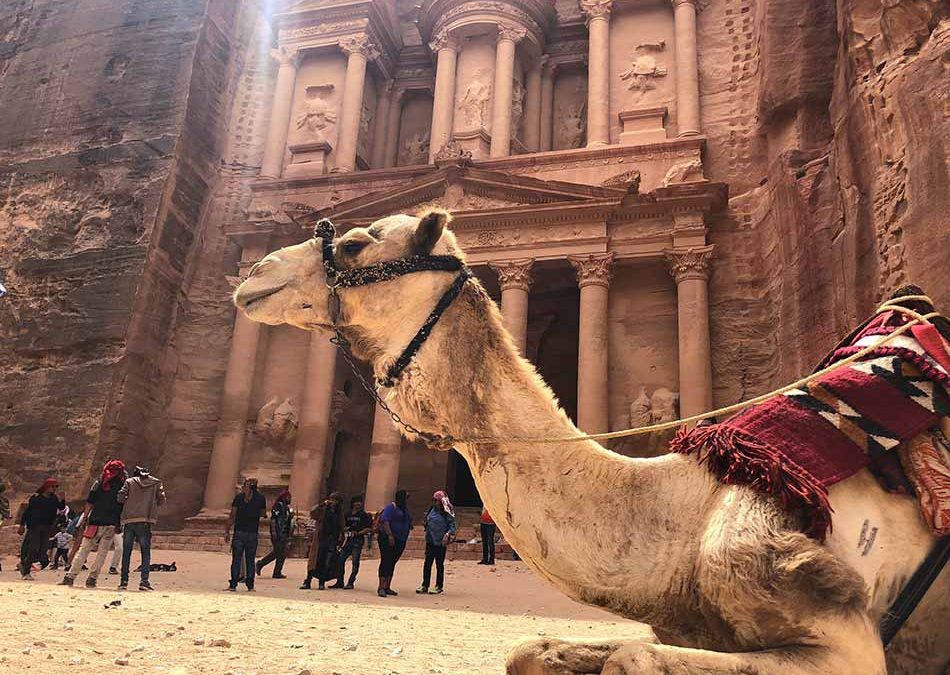 The “Lost City” of Petra in Jordan is popularly known as a UNESCO World Heritage and one of the New 7 Wonders of the World.  It is a large metropolis of monuments and other ancient structures directly carved into vibrant red, pink and white sandstone cliffs. The city can be reached through a long gorge called the Siq, which leads directly to the famous Al-Khazneh (The Treasury), where several scenes from the Hollywood blockbuster movie “Indiana Jones and the Last Crusade” was filmed.

Thousands of years ago, this pre-historic Jordanian city was thriving at the heart of the Nabataean Kingdom. Since then, it had sat empty and cast in shadows. The archeological and historical city of Petra is a majestic place that holds hidden secrets waiting to be uncovered.

The Rediscovery of the Lost City

In 1812, Swiss explorer and scholar Jean Louis Burckhardt described Petra in his journal as one of the elegant and sumptuous remains of antiquity to exist. He was the first outsider to cross the threshold of the lost city for more than 600 years. Since the time of the Crusades, the city has remained hidden to the West due to its natural fortifications. Although the place is not unknown to Bedouin tribe locals, they were unwilling to make it known into existence because of fear that treasure hunters might flock the ancient city.

In its heyday, which was around the time of Christ, Petra was one of the most remarkable and wealthiest cities. It is home to 30,000 people and was the center of the whole kingdom that is four times bigger than today’s modern Jordan.  The Nabataeans were at the helm of the city. They are an Arabian tribe who efficiently made use of their knowledge and experience living in the desert to gather wealth during the caravan trade. The striking and grand edifice of The Treasury is physical proof of their vast wealth.

The Al-Khazneh is one of the most elaborate temples in the ancient city of Petra and is believed to be a mausoleum of the Nabatean King Aretas IV. Its misnomer “The Treasury” was coined from the belief that amounts of hidden gold can be found in an urn carved centrally at the second level of the temple. Because of this, the vessel is covered with several bullet holes due to past attempts to retrieve the mythical treasure.

However, Burckhardt was not after this treasure, but he was into something even more significant. He decided to go to Syria to master the language of Arabic and later converted to Islam, granting him a new name as Sheikh Ibrahim bin Abdullah. He then adopted the local customs and became closer to the Bedouin locals, creating a perfect master of disguise.

The Secret Plan of Burckhardt

While traveling to Cairo, he learned of a rumor about the hidden ruins among the Wadi Musa mountains. Upon knowing this, he was quick to develop a ploy wherein he pretended to have made a pledge of slaughtering a goat in honor of Aaron whose tomb is located at the extremity of the valley. His strategy worked, and he was allowed to make his way into the valley together with a Bedouin guide.

When they reached more in-depth into the valley, he was utterly astonished by the numerous tombs and the grand amphitheater carved into the rocks. Burckhardt couldn’t stop himself to scramble up to wander the ruins. Seeing Burckhardt’s incursions, his guide hurried him back to the city’s parched core and accused him of being an infidel. Because of fear that further affliction might expose his journal, he did not venture any further.

Away from Petra’s Tourist Trail

There are a few numbers of tourists who prefer to go beyond the main sites, such as the path from the Treasury all the way to Qasr Al Bint. This route leads to Petra’s suburbs where there are a few people in sight. The sandstone hill is still scattered with ancient modest sepulchers and dwellings and some grand edifices that represent the outstanding Nabataean carving skills. Going further into the mountains is a tomb, must be one of the last ones, where a Bedouin family still resides.

The small but complex entrance-way is dark and filled with a rigid door and a garden of fruit trees and other plants. Beyond the entrance is the Haroun’s Terrace where a small white mosque can be seen. This sacred place for both Muslims and Christians is known as the Jebel Haroun, which is thought to be the Mount Hor mentioned in the bible where the brother of Moses Aaron (Haroun in Muslims) was buried.

The Melting-Pot of Cultures

The ancient city of Petra is a hotchpotch of creative influences gathered while they were trading – a mix of Assyrian, Egyptian, Hellenistic, Roman and Mesopotamian imagery. This cultural melting-pot is more apparent in the large scale Monastery of Petra that is carved deep into the mountainside. One can quickly estimate the long hours of carving and chiseling efforts to make this majestic creation into fruition.

The Monastery is situated at the top of an 800-step rock-cut following the path trod by the people when it was used as a place of worship. It was initially built as a tomb in the 3rd century BC but was probably used as a temple later on. The crosses engraved into the walls also suggest that the place was once used as a church by the Byzantines. Indeed, Petra is that place which had witnessed both the rise and fall of one civilization after another.

In Burckhardt’s case, he didn’t even reach as far as the Monastery. Although his discovery caused a lot of excitement to his colleagues when he informed them about it through a letter, he never got the chance to enjoy his fame. Burckhardt continued living his life traveling around the Middle East and Africa as Sheikh Ibrahim bin Abdullah. He died young at the age of 32 due to dysentery in 1817.

The following two centuries, Burckhardt’s story has made countless other scholars and explorers to follow in his wake, yet today, Petra still remains a city full of untold mysteries.