A Quick Guide to Thailand’s Capital For New Tourists 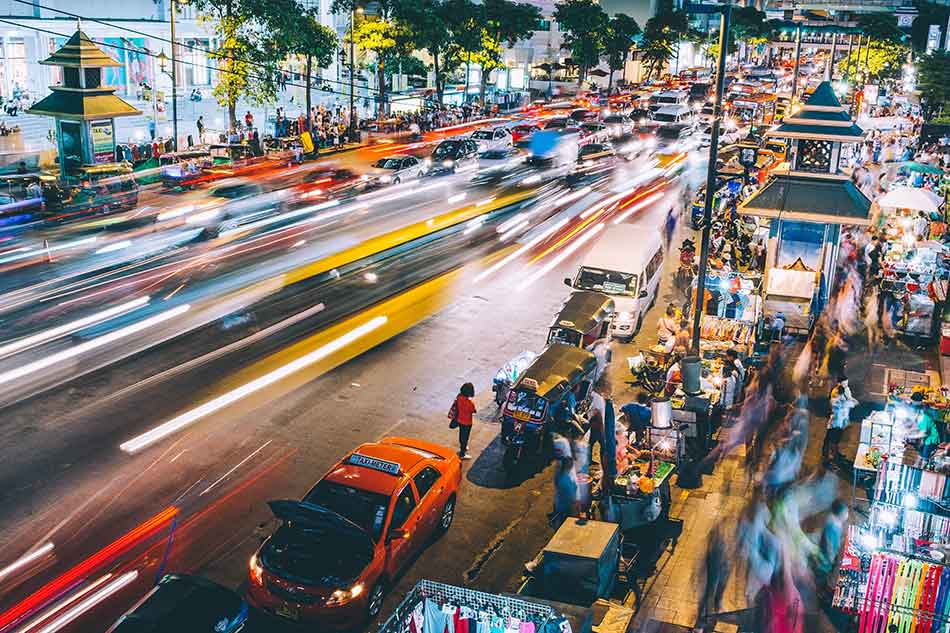 Exploring Bangkok will get you to a city where you can find temples along the bright strips of immorality, huge malls near 200-year-old houses, and restaurants in skyscrapers overlooking streets that are filled with food carts. As Bangkok moves towards its future, these scenes will remain, providing the city its one-of-a-kind Thai flavor.

Sights and Places to Visit

The ideal starting point of your visit is at Ko Ratanakosin, an artificial island and the birthplace of Bangkok; the royal places and the Buddhist temples which include the Wat Pho’s gigantic reclining Buddha; and Wat Phra Kaew & Grand Palace. These places contain some of the most visited and important sights in the city. Crossing the Chao Phraya River, going to Thonburi will take you to Wat Arun, one of the few Buddhist temples in Thailand where visitors are allowed to enter.

Next destination is the Banglamphu, the classiest in Bangkok neighborhood. It has golden temples, busy wet market, and beautiful leafy lanes. It is the attractive old-world face of the city until you get to the Khao San road, where backpackers from around the world meet. Khao San is known for the best spot to shop for backpackers’ stuff. You can also visit the place for some beer on a cool evening at one of the fun strip’s bars like Hippie de Bar.

Bangkok’s Chinatown is the closest scene of any Chinese city. The area is filled with gold and jade shops, vendors and bright signs in Hanzi or Chinese characters. With the area’s extravagant vibe, it is not surprising that the Chinatown has the world’s biggest solid-gold statue of Buddha. Chinatown becomes Bangkok’s best place for street food feasts with its open-air restaurants like Nai Mong Hoi Thot, the well-known Phadungdao Seafood Stalls, and its lively streets.

Siam Square is the city’s commercial district. There, you will find outdoor shopping stalls, multi-story malls and tons of markets. Aside from megamalls like Siam Paragon and MBK Center, you will also have the chance to see the beauty of Thai art and architecture museum called the Jim Thompson House.

While it is not visible from high-rise condos, hotels, and office blocks, Chao Phraya River serves as a watery backdrop linking Bangkok’s neighborhoods. You can still see the history in the form of crumbling architecture in the riverside area, the Mandarin Oriental – which is approximately 140 years old –, the city’s most well-known hotel.

Going inland, you will see the city’s primary financial district, Silom. At night, Silom turns into a nightlife destination with places like Bangkok’s “gaybourhood” located at Soi 4, Silom, and one of the world’s most popular red-light districts, Patpong. Near the area is a more relaxed embassy zone called Sathorn, a place where you can find nahm, which is possibly Bangkok’s best Thai restaurant. Right next to it is Lumphini Park, which is the premier green zone at central Bangkok and best visited during cool afternoon or morning.

Sukhumvit road is the city’s unofficial international zone. There, you can find French restaurants, Japanese enclaves, Middle Eastern nightlife areas, and tacky bars. This modern side of Bangkok shows in bars like WTF and Badmotel, and international diners like Little Beast and Jidori-Ya Kenzou.

Your Bangkok tour would not be complete without visiting Chatuchak Weekend Market at the northern part of the city. Known as one of the largest markets in the world, it has tons of vendors that uniting commerce where you can find a wide array of products from vintage sneakers to exotic fish.

The place is cool but conservative, so you need to bring sarong or scarf so you can cover your arms and legs if you are going to enter to some temples.

How to Get Around

There are two airports in Bangkok. The primary airport is the Suvarnabhumi International Airport located 25 kilometers East of the city’s center. To travel from and to Suvarnabhumi, you can choose between city buses, Airport Link Train, and metered taxis. Don Muang International Airport, on the other hand, is a low-cost terminal that is located in the Northern part of the city. You can choose between two airport bus lines and metered taxis as a mode of transportation.

The public transportation network in Bangkok is consistently growing, though it is still new and getting to some older areas like Banglamphu and Ko Ratanakosin still consumes a lot of time. The best way to deal with this is to combine a longer trip on MRT or BTS Skytrain and short trips on a taxi.

Riding on the elevated BTS Skytrain is possibly the most convenient and most efficient way to travel around Bangkok. On the other hand, MRT is somewhat convenient but cheaper compared to BTS. Additionally, you can get good deals on taxi during off-peak hours. If you want to see some beautiful spots while traveling to your destination, riding the Chao Phraya River Express would be the best choice.

Hotel bookings should be made two months earlier, particularly in December and January.

Apply for a visa a month ahead before your flight at the Thai consulate or embassy in your country if you are going to stay for more than 30 days.

Introduce your self to Thai cuisines by taking lessons at Thai culinary schools or book a table at nahm around two weeks before you visit Bangkok.